The Pros and Cons of Stem Cell Research

It used to be that the study of biology was simply about the joy of discovery. Scientists discovered that microorganisms are the main culprits when it comes to sickness and diseases so they found a way to eradicate them either through the simple washing of hands or to the more complicated solution that calls for vaccinations. Scientists also discovered that vitamins play a major role in nutrition and so they help devise methods to help educate people on the importance of a balanced diet. Thus, researchers working in the field of biology continue to discover many things about the biological aspect of living on planet earth. But in the past few decades the study of biology has grown into leaps and bounds. This is much evident especially in the discussion concerning stem cell research. Stem cell research promises to bring biology and modern medicine to the next level but there are many who argue that this type of research is unethical and needs to be banned permanently.

Before going any further it is imperative to take a closer look at biotechnology, bioethics, and of course stem cell research. Biotechnology in layman’s terms is the marriage between biology and technology. This simply means that 21st century breakthroughs with regards to the study of life is not only limited to the use of technology to observe microorganisms and to peer inside human bodies. This time technology is used to manipulate life so that it will grow and behave differently than what nature intends it to be. For instance scientists can now perform genetic manipulation in human embryos (Randerson, 2008). The said manipulations are justified on the grounds that scientific breakthroughs in this area of study promise to help eliminate diseases and defects in newborn babies as well as provide medical solutions for adults who suffer from debilitating diseases.

Don't use plagiarized sources. Get Your Custom Essay on
The Pros and Cons of Stem Cell Research
Just from $13/Page
Order Essay

But there are interest groups that question the right of scientists to perform such types of experiments. Their concerns prompted the creation of a relatively new discipline called bioethics. And as the name implies it concerns the process of determining what is right and wrong when it comes to tinkering with human life in general and human embryos in particular. This is seen in the current debate on stem cell research. In the United States the Louisiana Right to Life Federation is against the use of human embryonic stem cells in scientific experiments. In Europe the Pro-Life Alliance as well as the Linacre Centre also argue that this type of research violated the human rights of the embryos (BBC News, 2003). But progressive thinkers as well as businessmen who will potentially profit from scientific breakthroughs may find it hard to turn away from stem cell research.

Just like the other biotechnology issues such as cloning and genetically modified organisms, stem cell research is not easily understood. The media is on to it and released a significant amount of information about it; but try as they may, they could not provide a simple and all encompassing explanation of what cloning, genetic modification and stem cell research is really about. This is understandable because media will shape news and information based on what sells or what the public would like to hear. In the process there are a lot of important details that are left out in the discussion.

Moreover, the difficulty in understanding biotech issues such as stem cell research is seen in the fact that this new technology belongs to the category popularly known as cutting-edge technology, which could either mean illegal or non-conventional. Since the technology is new there is relatively little detailed information regarding human embryonic stem cell research and this dearth in information is adding more problems to the already volatile issue. The following pages will attempt to sort things out.

The technical term given for this cutting-edge research is Human Embryonic Stem Cell Research or hESR. In this regard the banning of hESR was explained succinctly in the following statements, “Embryos are human individuals and should not be used or destroyed for research purposes” (Dahnke & Dreher, 2006). This means that hESR utilizes fertilized human sex cells that will subsequently turn into a zygote and then into a blastocyst and if given nurture will develop into a human fetus. The following diagram will help the reader understand the complexity of stem cell research. 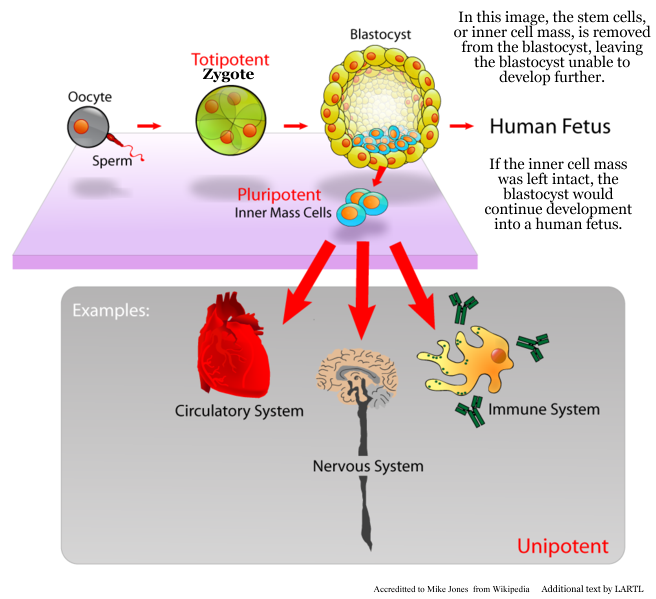 Using the diagram seen above, one can now see clearly the relationship between human embryos and human stem cells. The stem cells are taken from a human embryo which necessitates the destruction of the embryo. The stem cells, also known as inner mass cells are the building blocks for the creation of different human tissues that in turn will develop into organs such as the heart, kidneys and lungs. If researchers will succeed in their experimentations then in the future there will be no problems regarding cornea, heart and kidney transplants.

In the present there is a long list of patients awaiting donors – those who will donate their corneas, kidneys, and hearts so that others may live. In some cases this is only possible if the donor is dead. Aside from that not all potential donors can donate because there are other factors that need to be considered such as compatibility. If the donated organ is not suited for transplantation then the recipient’s body will reject it and cause a lot of complications. In other words there is a long list of recipient waiting and they may be waiting for a very long time. But with a breakthrough in stem cell research they would never worry about compatibility and availability because scientists can grow the needed organs for them.

Aside from the above-mentioned argument scientists and interest groups who are in favor of stem cell research provided the following reasons why hESR must be supported:

The debate goes back and forth. Those who are against hESR are arguing on the basis of ethics, meaning there are things in life that could not be reduced to numbers and scientific terminologies. In the case of hESR the argument that stem cells are just a bunch of cells is not a convincing argument for this group because for them there is a line that should not be crossed irregardless of the potential benefits and even if it promises to improve healthcare in particular and the living conditions of the human race in general. For these groups there is a great potential for abuse. One can easily imagine a future where human babies are created in test tubes and then treated as an object that can then be farmed for healthy organs such as hearts, kidneys, eyes, lungs etc.

Those who are in favour of hESR on the other hand are trying to convince the other camp to look at the other side of the issue which is the possible cure for Parkinson’s disease and diabetes among others. They believe that embryos used in the research are not yet humans and therefore can be used for experimentation. For this group it is better to strive to save lives that are currently in danger of being wiped out by debilitating medical conditions rather than to worry about the possibility that they are indeed destroying human life at its most basic form.

One of the most fascinating things about biotechnology is that it is the union between the study of life and technology and when the two are taken together it can then be used to manipulate natural processes. The manipulation can be done to enhance what is already in there such as improving the growth rate of plants and animals, or it could mean the creation of something new such as the creation of new varieties of plants. For thousands of years man was content to stay on the sidelines, in awe of nature and continued to find ways to deepen his understanding about the environment. But in the 21st century man’s desire to participate in the evolution of the human race has led him into a new field called biotechnology.

In the distant past man observes and records. He discovered that germs and viruses are causing diseases and so he promptly informs everyone to find a way to eradicate harmful bacteria in the body and in the home. In his incessant pursuit of knowledge particularly with regards to study of life he discovered that vitamins are essential aspects of nutrition and so he began to develop a method of improving the eating habits of humans. All of these are part and parcel of biology but in all of the aforementioned activities man simply reacts and order his behaviour based on what he has discovered. But in the 21st century man is no longer content to react he decided to be proactive and find ways to solve problems even before they emerge.

With regards to diseases and genetic abnormalities, one proactive way of dealing with these problems is genetic manipulation. But genetic manipulation could not take-off the ground without first achieving breakthroughs in human stem cell research. And human stem cell research will not commence unless bioethical issues surrounding the procedure can be resolved. At this point stem cell research is supported in most advance countries but it is highly restricted by laws. There are many groups who argue convincingly that scientists are allowed to experiment on animals and inanimate objects but there are restrictions when it comes to studying human beings, especially when it comes to tinkering with the basic materials that are needed in creating life.

For many hESR is unethical considering the fact that in order to harvest the stem cells two things need to occur: first there must be the presence of healthy human embryos that if allowed to grow even in an in vitro environment, will continue to develop into a human foetuses; and secondly there is a need to destroy the said embryo to harvest the stem cells. For some groups this is tantamount to murder. There are other groups on the other hand who believe that they are not destroying life but on the contrary they can potentially save thousands or even millions of lives, especially those suffering from debilitating medical conditions such as Type1 diabetes and Parkinson’s disease.